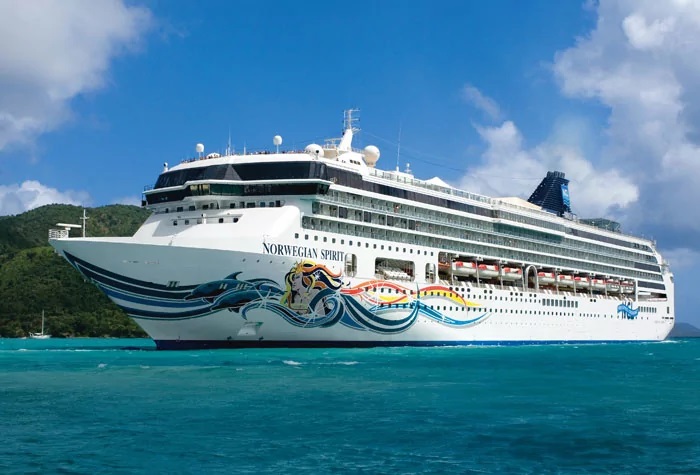 Take a trip around some of the world’s most desired destinations, all aboard Norwegian Spirit. Visit the breathtaking Barcelona, full of palpable history, where you can lose yourself strolling down the medieval streets of the Barri Gotic and witness other-worldly Modernista churches like Gaudi’s La Sagrada Familia. Discover Valletta, a city that prides itself on its magnificent Baroque palaces, piazzas, gardens and churches. Witness the magnificent Magisterial Palace, home of the Matese Parliament and offices of the President of Malta. From witnessing the original site of the Hagia Sophia, to walking around the Old City that reflects cultural influences of the many empires that once ruled here, you’ll want to take a stroll around the historically rich Istanbul. Take a walking tour of the old fortified city of Rhodes, and be in awe of the breathtaking Grand Master’s Palace. Get ready to immerse yourself in infinite cultures during your 11-day cruise.

The airport for Puerto La Cruz in northeast on the Caribbean. Isla de Margarita is off the coast.

Today the port of Civitavecchia has the advantage of being the Italian “stepping stone to the Mediterranean” thanks to its excellent weather conditions and ideal geographical location.

From Civitavecchia it is a train ride to almost anywhere in Italy and a quick jaunt to Sardinia. Its position has helped make it the main national coastal shipping port.

Turkey is a great country to visit. The Turks are mostly overwhelmingly friendly to foreign visitors, the cuisine is frequently excellent, the cities are dotted with majestic old buildings and the countryside is often worth a good old-fashioned gasp. There’s an enormous variety of things to see and do ranging from water sports to mountain trekking, archaeology to night-clubbing and river rafting to raki drinking. Whether you leave Turkey with magnificent carpets, amulets to ward off evil, belly-dancing tips, an appreciation of its history, or just a tan, you’re likely to want to go back for more.

The famous city of Istanbul stands where Europe meets Asia and where East meets West, with all its magnificence, and signs from its far-reaching past. It has such a location that it constitutes not only a city of history, but also one of natural beauty beyond example. Extending on the two sides of the Bosphorus bordered by green groves, it also possesses beautiful shores along the internal Marmara Sea. Facing the city there exists small, pretty islands, adorning this big sea, Iying in the middle of the region. The sea features the land in that the climatic characteristics of the Black Sea influencing the north of it, is separated from the typical Mediterranean climate prevailing in its south. Rainfall is high enough to facilitate growing a variety of fruits, while snowfall enlivens the winter holidays. Indeed, it is Istanbul’s variety that fascinates its visitors. The museums, churches, palaces, great mosques, bazaars and sights of natural beauty seem inexhaustilbe.

Istanbul is also an international art and cultural center. In fact whatever intrigues your heart and mind can be discovered in this city where time lives on.

Ah, the French Riviera…is yours for the taking, for a few hours anyway, when you leave the town of Villefranche to tour Monaco, Monte Carlo,St.-Paul-de-Vence, Cannes, and the Grand Corniche.

Monaco is one of the smallest nation’s of the World and Monte Carlo is its city with the Palace place on top of a high rock overlooking the city, the quaint port and the Meditteranean Sea. The small town and Palace area are a must. Plan to spend at least half of a day exploring the many shops along the narrow streets and enjoy the views from the Palace grounds.

Monte-Carlo was founded in 1866 during the reign of Charles III,who gave it his name. This area includes the world famous Casino, great hotels and the recently completed recreational centers consisting of the Centenaire gardens, the Larvotto beach and the Monte-Carlo Sporting Club.

Rhodes (rodz) or Ródhos, island (1981 pop. 40,392), c.540 sq mi (1,400 sq km), Greece, in the Aegean Sea, near Turkey; largest of the Dodecanese island group. Its fertile coastal areas produce wheat, tobacco, cotton, and olives. Tourism and fishing are important. Colonized by Dorians before 1000 B.C., it reached its height as a commercial and cultural center in the 4th-3d cent. B.C. Julius Caesar studied at its renowned school of rhetoric. After its decline, Rhodes was an ally of Rome. Captured (1204) from the Byzantine Empire during the Crusades, it was held by the Knights Hospitalers (1282-1522) and the Ottoman Turks before it was taken by Italy in 1912. In 1947 it was ceded to Greece. The famed Colossus of Rhodes (see under colossus), a statue erected (292-280 B.C.) by the citizens of the ancient capital
city of Rhodes, was destroyed by an earthquake in 224 B.C.

Fares shown are in U.S. dollars unless otherwise noted, and are per person, based on double occupancy. Government taxes, fees, and fuel supplement (where applicable) are additional. NCL reserves the right to charge a fuel supplement without prior notice should the closing price of West Texas Intermediate Fuel increase above $65 per barrel on the NYMEX (New York Mercantile Exchange Index). In the event a fuel supplement is charged, NCL will have sole discretion to apply the supplementary charge to both existing and new bookings, regardless of whether such bookings have been paid in full. Such supplementary charges are not included in the cruise fare. The fuel supplement charge will not exceed $10.00 per passenger per day. Prices are based on availability and subject to change.

Click on the buttons below to request a quote on this deal or contact us directly with further questions or comments.

Request A Quote Send To A Friend Have A Question? Contact Us

Send To A Friend

Please don't close or refresh the page while we are processing your submission
Please be patient, this could take a few minutes.